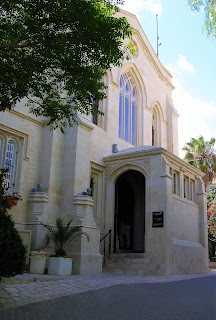 Just inside the Jaffa Gate for the Old City of Jerusalem opposite side of the street from the Tower of David there is an Anglican church.  It’s called Christ Church Jerusalem, and it’s the oldest Protestant church in the Middle East.

When I was studying in Israel several years back, myself and a few classmates joined this church in worship on a Sunday morning.  I’d never been to a service like this one.  Since many of the attendees are travelers, everything was spoken in English, but with appropriate translations into Arabic and Jewish languages as well.  When we sang, the voices of many nations could be heard.  It was really something to be part of. 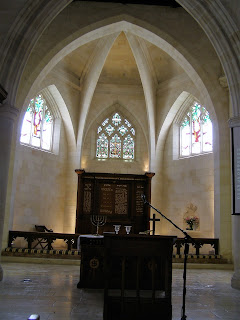 But the thing that struck me was The Lord’s Supper.  It was celebrated unlike the way we do at the church where I pastor.  While we pass the elements around – up and down the rows go the polished tin trays – there attendees would leave their seats pew by pew, approach a long wooden railing beyond the pulpit, kneel, and receive from the pastor the bread and the juice.  And it was in the receiving of the bread that I was particularly struck…or maybe broken.

As I knelt there with my hand out, palm up, the pastor approached me and laid a crisp wafer in the center of my hand.  Then, with a startlingly firm grip, he clasped my hand between his thumb and fingers and crushed the wafer into several crumb size pieces…

“The Body of Christ, broken for you,” he said.

I stayed there for several seconds, trying to be fully present in what just happened.  Communion in that moment became something more or higher.

Indeed, I remembered precisely what this meal compels us to remember; the Body of Christ broken, the blood of Christ poured out!  But higher still, as I stared at those shards of wafer in my hand, the reality of Christ’s death for this guy overwhelmed me. 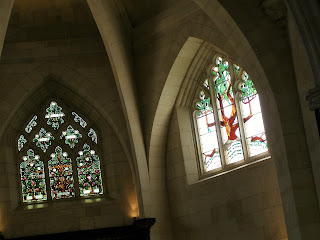 A celebration of thanks.

I tossed the bits of wafer into my mouth, followed by a healthy swig of grape juice, and allowed the juice to saturate the wafer with flavor.  Communion moved from being something regular and monthly to being something fresh and meaningful and alive again.

There is no way of my knowing what shape The Lord’s Supper takes at your church.  Maybe it’s passed around, like at mine?  Maybe it’s received from up front?  Maybe something entirely different yet?

But I might suggest, whatever the manner, why don’t you hold that bread for a moment longer than what you’d like.  Recall the words of the prophet Isaiah:

“He was wounded for our transgressions; he was crushed for our iniquities.  Upon him was the chastisement that brought us peace, and with his stripes we are healed.” (Isa. 53.5)

He was crushed for our iniquities…  Mine and yours – remember this.
With his stripes we are healed…  Me and you – give thanks for this.

You might even crush that little morsel of bread in the palm of your hand.  Maybe let it linger on your tongue as the grape juice saturates it with flavor.  Maybe…or maybe not.  I’ll leave that up to you.