The Pulse Tragedy | A Pastor's Quiet Voice Among the Masses

I’m an associate pastor at a Baptist church.  I was sitting in a congregational meeting on Sunday morning, June 12.  The information being presented was familiar to me from half a dozen prior conversations.  My phone was an easy distraction.

That was the Yahoo headline I read.  You probably read a similar one.

Since then, online news feeds have not ceased to churn up and splatter new details across media devices of all sorts for five days straight.  America’s solace in times of senseless tragedy seems to be tidbits of fact framed in speculation.  Thus, news networks keep the ticker scrolling with updates while red-faced anchors share split-screen air time with experts and analysts and around-the-clock-on-the-scene live correspondents.

I, like you perhaps, have read only the headlines, because at the end of it the news is the same:  50 lives have been stolen…killed…destroyed; the shooter himself number 50.

Now details on the lives of those killed are surfacing.  All of a sudden they aren’t faceless bodies lying under blankets miles away and margins apart from the drama of our days.  All of a sudden their story isn’t fodder for louder political banter.  Now these are real people who lived real lives.

They breathed in and out the common grace of God.
They had the breath of life in lung. 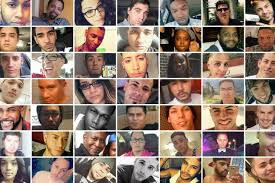 They were someone’s child.
They joined us in this world through pain in childbearing.
They loved and were loved.
They walked and talked and ate and drank and made merry.
They laughed at bad jokes.
They cried at funerals.
They argued with friends and foes alike.
They worked and studied and dreamed of more and better.
They voted and held views on the left and the right.
They harbored grudges and afforded forgiveness.
They were kind and mean and joyful and grumpy and generous and stingy people.
They were a lot like you and me!

In fact, they were exactly like you and me in at least one aspect – an aspect that determines all other aspects – they displayed in their being the irreducible dignity of bearing the image of God.  Therein at least they each will be deeply missed from among us.  Christian or not, gay or not, fewer image bearers means our nation is poorer now that they’re gone.

As I have mused over this heartrending event, the following verses and thoughts have stirred my prayers…

“The thief comes only to steal and kill and destroy.  I came that they may have life and have it abundantly.  I am the good shepherd.  The good shepherd lays down his life for the sheep.”
John 10:10-11

Notice the difference between the two?  This is Jesus talking.  He’s the first person singular pronoun here.  He’s the one who gives life fully, which is the polar opposite of the thief.

“Come to me, all who labor and are heavy laden, and I will give you rest.  Take my yoke upon you, and learn from me, for I am gentle and lowly in heart, and you will find rest for your souls.  For my yoke is easy, and my burden is light.”
Matthew 11:28-30

It’s an invitation…from Jesus himself.  “Come.”

In the aftermath of tragedy our souls; body and spirit united, toil and struggle and thrash about with weighty burdens of worry and uncertainty and suspicion and doubt.  If we could only stop…rest.

The picture is from days long gone.  A baked clay field strewn with weeds and whatnot.  A strapping farmer setting hand to plow.  A pair of oxen beneath a broad wooden yoke.

We don’t have to drag the plow through the hardened earth alone.  Jesus has invited us, in moments just like this, to bear up under His yoke and find a gentle, humble Lord by our side.  There is rest for our body and spirit in Jesus Christ.

“Be sober-minded; be watchful.  Your adversary the devil prowls around like a roaring lion seeking someone to devour.  Resist him, firm in your faith, knowing that the same kinds of suffering are being experienced by your brotherhood throughout the world.”
1 Peter 5:8-9

How easy it is to be devoured by the perils of others.  One instance of senseless horror sows fear into the hearts of millions of people.  It spreads through a subculture, a community, a country, a global village.  It spreads like prey scattering about the tundra as a hungry lion lurks near.

Resist stumbling into the fear-sown seed bed of the Devil.  Resist running just because others are running.  Resist the mainstream.  We’re useless when in fear.  Be firm in faith.  This suffering, their suffering, not yours, is not unlike that of folks all over the world.  Those actually affected need the faith-filled lives of those actually unaffected.

“There is no fear in love, but perfect love casts out fear.  For fear has to do with punishment, and whoever fears has not been perfected in love.”
1 John 4:18

These two, across cultural bounds, call to mind many differing ideas and ideals.  The meaning narrows in the context of John’s letter, however.

You and I have neighbors and friends and family who are scared.  We know folks, intimately perhaps, who have not been perfected by the love of God in Jesus Christ.  They have no way to appropriate mass shootings or terror attacks or even the sight of a young Muslim man (or gay man for that matter).  Fear has bound them hand and foot in a dark corner of distrust and despair.

The presence of love; our love, the love of God that abides in genuine Jesus followers, works to cast out that fear.