I did a little digging around with some statistics this week and I learned some interesting things about Christians and generosity.

One third of all Americans attend religious services, which sounds broad, but these are the folks who would say yes if you asked them about being Christian.  It’s you and me and millions of others who gather Sunday morning for church.  Well get this, 2/3 of all charitable giving in our country comes from that 1/3!

The only problem with that is this – and we best catch this before we start patting ourselves on the back – the problem is the average amount given away by that 1/3, generally speaking now, is less than 2% of one’s annual income.

So sure, church folks give more than non-church folks.  But what is given seems to be suspiciously lower than what could be given.  And even if that amount feels low for you, or the statistic itself feels unreliable, it certainly does at least one thing for me:

It tells me that Christians in general are missing out
on an entire dimension of this joy filled life we live in Christ;
namely, being generous,
and the particular blessings we experience
that are born from generosity.

My role as a pastor is nothing if not that of a steady encourager, equipper, exhorter even to others to be more like Jesus.  And it is my conviction that being generous looks more like Jesus than being stingy does.

You see, giving generously to others – far from being a contribution back to God (as if He needed anything) or a way of showing God the depth of our gratitude (for He sees deeper into our hearts than we do) – giving generously to others is an expression of our faith in God as the one who has graciously given us all things in Jesus Christ, beginning with the means to becoming righteous or rich as it were.

And what Paul shows us in 2 Corinthians 8 and 9 is that the basis for giving generously is an understanding of the grace of God.

“You know the grace of our Lord Jesus Christ…” Paul says in 2 Corinthians 8:9.

“…that though Jesus was rich, yet for your sake he became poor, so that you by his poverty might become rich.”

You caught the unparalleled generosity of our Savior there?  And notice what fueled it…Grace!  And God’s gracious acts toward us ought to fuel our generosity to others as well.  Where we come up short in our generous giving is evidence that we don’t really understand the grace of God at work in our lives after all. 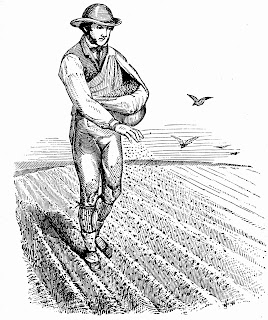 The reality is this verse is multi-layered and I’m not going to unpack the whole thing.  But maybe we can skim the surface a bit.

And if you are imagining a cheap miserly sort of fellow, you are right on the money.  (If you are naming that fellow after folks you know, you better back the truck up.)  Paul says this guy will reap precisely what he has sowed.

Eugene Peterson in the message calls him out: “A stingy planter gets a stingy crop.”  The visual isn’t hard to imagine.  Who wants to be that guy?

But Paul continues: “…whoever sows bountifully will also reap bountifully.”

And if you have a Bible there, maybe it has a little footnote there that indicates a better understanding of that word bountifully as with or because of blessing?  Which is good, and I like it better.  Because in biblical theology blessing is consistently understood to be a specific act of the one true God on behalf of His own people.

Blessing is not, as we may often mean when we pray, a sort of non-descript experience of things going good.  It’s higher than that.  A blessing is a gracious act from a gracious God.

And when we switch out that wording there, the emphasis shifts from an amount of giving to a manner of giving, pointing back to a fundamental understanding; or lack thereof, of the grace of God at work in our lives.

One hungry hobo on the street corner with a cardboard sign.

First guy sees his cup holder as being half-empty.  “I can’t afford to give to you, I’m sorry.  I have parking and I have to buy a guy coffee later and whatever else.”  Drives away poorer at a level far deeper than he could have imagined.

Second guy, same amount of change in the cup holder, but sees it as half-full.  “I have plenty.  Here, have a handful for you.”  Drives away richer than ever before.

I’ve shared this before, but the best definition I have for the grace of God is this:  The unmerited release of God’s limitless love…to me…to you by the removal the sin barrier. (David Needham)

Limitless love in the sense that it is sourced solely in the eternal and infinite quality of God himself.  He is the living headwaters from which pours anything and everything that has ever been perceived and known throughout the ages as true love.

And unmerited release in the sense that there is nothing you or me or anyone throughout time, past, present, or future could possibly do alone or collectively to earn such a release of love which we enjoy through Jesus Christ, God’s Son!

Imagine for a minute…

How would these lives we live in this world be different
if God sowed sparingly?

God himself sowed bountifully.  He was not stingy toward us.  He did not sow sparingly; he did not spare even His own son.  Further still, “how will he not also, with Him, graciously give us all things?”

The one who sows sparingly, because of stinginess, sparingly will they also reap.

The one who sows because of blessing; because of an understanding of the gracious acts of God in their life, with blessing will they also reap.

So, I wonder…how do you sow?