Okay, where was I again?

Ah, that’s right.  I was stuck in a burdening moment of realizing that when Jesus talked about the “rich,” he was talking about me…us…everyone who has a computer, internet, indoor plumbing, a change of clothes, a bowl of Cheerios, etc.  And now we stand at a threshold that’s really small and narrow; the size of the eye of a needle, starring impossibly at the opening.

Wonderfully, it’s not a difficult threshold to maneuver through.  But it can trip us if we aren’t careful.  See, we live in the western minority world and we’re easily tugged on emotionally and often prone to knee-jerk response.  We can too easily swing toward one of two extremes here:

1.       Having realized that my seeming poverty, in contrast to those with more than me, isn’t really all that povertous at all in contrast to the countless – and nameless – folks with significantly less than me, I quickly yank back the strings of my heart and am soothed and relieved; “liberated” to live on in the now seemingly luxurious conditions I have carved out for myself.

Hopefully this reaction strikes you as both arrogant and ignorant.  It’s the “jerk” part of knee-jerk that resides here.  Really this is no further along than where I began.  Instead of looking up and wining, now I’m looking down and winning.  It’s the psychology of “cup half-full or half-empty”
and it’s temporal at best in its relief.  There is nothing liberating about this.  It’s bondage.  Consolation by comparison is never helpful or lasting.  It merely fortifies our hearts more heavily from others.

The opposite swing, however, may be equally as unhelpful and unlasting…

2.       Having realized that my seeming poverty, in contrast to those with more than me, isn’t really all that povertous at all in contrast to the countless folks with significantly less than me, I am cut to the heart much like a hot spatula through Jello and am constrained to contrive a crusade of epic proportion to flatten the curve of wealth and save the poor and needy.

How can I go on living with all this excess?  I’ll sell everything I own and bail all those Liberians out of poverty!  Who’s with me?!

Hopefully this reaction strikes you as arrogant and ignorant also.  Surely you catch the tone of self-pity.  This is so far from where I began it is virtually removed from reality.  It’s the psychology of “savior complex” and, like #1 above, it is equally as temporal in its relief.  Honestly, my net worth is not likely to make much of a dent in redeeming the povertous conditions of the majority world.  Perhaps the net worth of everyone who reads this blog could make a dent?  But really, we’re talking about 100 million people…and that only accounts for the last five places on the list.  The list is lengthy and the economic descriptor shifts from “richest people” to “poorest people” a short distance from the top.

So what’s a sweet middle ground?  How shall I respond so I might stride through this threshold with tripping or barreling into the edges?

Read this Bible passage.  Three things that encourage me, all in bold italics.  I’ll be back soon with some further and final thoughts.  Then I’m done…

17 And as [Jesus] was setting out on his journey, a man ran up and knelt before him and asked him, "Good Teacher, what must I do to inherit eternal life?"

18 And Jesus said to him, "Why do you call me good? No one is good except God alone.  19 You know the commandments: 'Do not murder, Do not commit adultery, Do not steal, Do not bear false witness, Do not defraud, Honor your father and mother.'"

20 And he said to him, "Teacher, all these I have kept from my youth."

21 And Jesus, looking at him, loved him, and said to him, "You lack one thing: go, sell all that you have and give to the poor, and you will have treasure in heaven; and come, follow me."

22 Disheartened by the saying, he went away sorrowful, for he had great possessions. 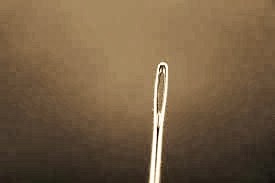 26 And they were exceedingly astonished, and said to him, "Then who can be saved?"

27 Jesus looked at them and said, "With man it is impossible, but not with God. For all things are possible with God."

28 Peter began to say to him, "See, we have left everything and followed you."

29 Jesus said, "Truly, I say to you, there is no one who has left house or brothers or sisters or mother or father or children or lands, for my sake and for the gospel, 30 who will not receive a hundredfold now in this time, houses and brothers and sisters and mothers and children and lands, with persecutions, and in the age to come eternal life.  31 But many who are first will be last, and the last first." (Mark 10:17-31 ESV)