I’m excited to announce that on Friday night a long time family friend of my wife’s family gave it a name!

I’ve tried referring to the time as “taking days off,” but that doesn’t get close to what we’re actually hoping to achieve in the time.

I’ve tried referring to the time as “Sabbath,” but then a whole explanation ensues.

Friday night though, Anna nailed it!

Anna has been a business partner of my wife’s Aunt for years.  She is originally from England and she preserves much of British culture in word and deed, punctuated by a delightful British accent.  We were out for dinner with her and Amy’s aunt Mary Alice.  As we wrapped up, having shared with them both of our plans to stop for a couple weeks and recharge a bit, Anna bid us farewell and offered the well wish of a wonderful holiday.

Of course the initial response is to sprint through the various upcoming holidays and sort out which one she may have been referring to.  “Next up is Labor Day?  Halloween doesn’t really fit the category.  Thanksgiving…or Christmas even, surely they are too far out to reference in late July?” 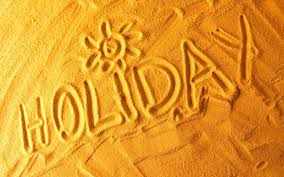 Then it dawns on us, as it would have sooner for anyone with a cultured sense, that holiday is British for it – for “vacation” or “taking days off” or, perhaps even more closely, “Sabbath!”  (Frankly, it took me remembering a brief story Anna told about “the loo” during dinner to reminded me that different cultures have different names for similar things.)

Later, based on a reflected whim of what I had understood the origins of holiday to be, I cracked open an old Webster’s dictionary and paged through the sea of vocabulary until I reached “holiday.”  And sure enough, just as I had suspected, remembered, and hoped, definition number one simply read:  Holy Day.

I exhaled the long deep breath I’d been keeping, and smiled like I’d finally solved a mathematical equation. 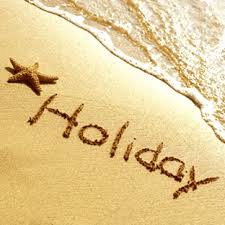 And I know, you’re wondering what the big deal is.  “They say holiday.  We say vacation.  So what?  Tomāto – Tomäto; Potāto – Potäto, right?”

Sure, I guess.  They act as synonyms.  And we really don’t have to pay much attention since Anna’s term is an ocean away terminologically.  But linguistically, “holiday” captures the hope for the Weeda’s in what we would otherwise refer to as vacation.

Without delving into my spiel on Sabbath, I would invite you to remember the origin of it.  You’ll remember that seventh and final day of creation’s story…

Literally, God “ceased and desisted” from the activity of creating unto the activity of stopping and resting.  Not because he was exhausted.  But to reflect on all He’d made; to enjoy the inherent goodness, or glory of it all.  But did you catch what it said in that last sentence?  Did you notice that God made one more thing, though not in like manner as that of the previous six days’ explosive creative array?  This was less of a formation and more of a declaration.  Look again…

Did you catch it that time?

What we hope for in it as a family (and I suspect you do as well) is a little S&R – some stop and rest time – and here we find out God especially blessed such a pursuit and actually made it holy!  He set it apart as special, for purposes that are special.  He made it a holy day; a holiday!

The etymology of “holiday” is more recent than what we see in Genesis.  It’s a Middle English term derived from two Old English terms:  hālig or holy and dæg or day.  This use traces back to the 12th century.  But I love the idea transfer from Old English back to ancient Hebrew; that at the outset of time as we know it, God decreed a time and space for stopping and resting that would be for us and to Him a holy day…even a holiday. 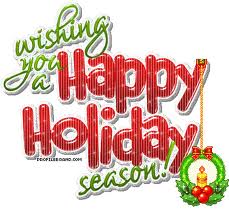 Proper or improper to make such a linguistic leap, I don’t know.  I suspect there are those who would rip this apart and argue for particular differing nuances between the voice of Hebrew and the voice of Old English.  So be it.  As for the Weeda’s, well I’m just thankful to finally have a word for it.

So, to all of you who are taking it sometime soon:  Happy Holiday!