One year ago this past Saturday, Kyril died.  Relax, you didn’t know him.  I suspect that no one reading this knew him.  I didn’t know him either.  But last Friday I met his mom, Marina (Maar-eenah, a Russian sounding pronunciation).

There is a little place near Semiahmoo where I like to go and study.  It looks like it was supposed to be a neighborhood.  The road is there.  The utilities are in.  But there are no homes.  Just a field with a couple dead trees and a pile of small boulders.  The place is meaningful to me for several reasons.  We’ve got some history together.  I often smile when I arrive.  The place is meaningful to Marina for one reason.  They too have history together…sort of.  I doubt she smiles when she arrives.

As I drove through the grasses in the field on my way to the narrow shady spot between two short and barely alive pine trees, I noticed a man and a woman lingering around the pile of small boulders just about 50 yards away.  I parked overlooking the water, rolled down my window, and allowed the spring heat to pour into my lap.  Bible open.  Note pad on the passenger seat.  Pen in hand.  Study was a go.

Most of the time this spot is still.  Not quiet, but still and whole.  The breeze is slight and cool.  Foot traffic on the gravel path is either an easy walk or a brisk jog.  Dogs don’t bark.  Seagulls don’t scream.  But Friday afternoon was different.  It wasn’t still and it wasn’t whole.  From time to time over the course of an hour and a half I overheard weeping and sobbing.  I’ll admit, sometimes I thought it was laughter.  But at those times I am certain it was instead a heaving and uncontrolled bawl.

The afternoon grew thin and I wrapped up.  I drove away slowly, as there is no possibe way to quickly leave a place like this.  As I did, again I noticed the man and the woman near the pile of small boulders.  He was standing a short distance back from the pile.  She was pacing about.  I stopped and watched.  She took plants from her truck and worked to place them in the ground.  She was not slow in her work.  She was intent and focused.  Should I talk to them?  She looks busy.  Curiosity has never failed me.  Neither has the Spirit's prompting.  I turned my car around and drove toward the pile of small boulders.

“Making it beautiful?” I asked in a rhetorical sort of way.  She had spread soil atop the hardened ground near the base of the pile of small boulders and planted several flowers and plants all around.

The woman paused from her work, stood up and stared at the flowers and plants.  “It is a memorial,” she said.  She didn’t look at me.  Either her voice trembled or her accent slowed her down.

“My son,” she replied.  Her chest heaved and she let out one of those bawls I’d heard earlier.  The man with her walked around the side of the truck out of sight.  All of me stopped.  I turned off my car.

“I am so sorry.”  There was a long necessary break.

She looked over at me and held up an empty gallon jug.  “Do you know where I can get more water?  I am almost out of water.”  She was desperate on more than one level. 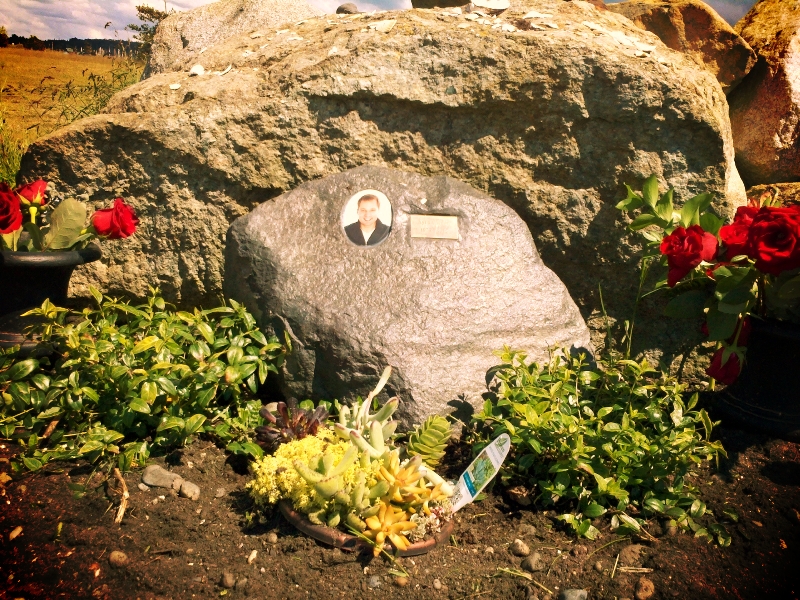 “Probably down at the park.  I'll go and fill those up for you.”  I got out of my car.  As I walked
toward her I noticed that one of the rocks in the pile of small boulders; the foremost rock, was a memorial stone.  A picture of a young man my age was inset with an engraved plate:  1974-2012.

I stood next to the woman.  We both starred at the flowers and plants as she handed me a couple empty jugs.  I glanced back at the memorial stone.  “How did it happen?”

“Right here.”  She spoke with calmness.  I connected the dots.  A suicide.

The next several minutes were spent small talking a bit.  She introduced herself.  She’s from Portland.  Her son was from Seattle.  I greeted her.  I told her I was a local and a pastor.  Often times I don’t offer that latter bit of info.  It seems to change the way people act around me.  However, it seemed to generate some comfort for her.  The man who was with her kept his distance.  He was a friend supporting her in her pain.  He was present but not imposing.  When she shared more about her son she sobbed.  When she shared further of losing her husband and parents as well I sobbed.  She was very much alone.

I left to fetch some water for her.  The folks at the marina store were more than willing to oblige.  In fact, when I told them what I needed and why, one of them recalled the tragic event from a year ago.  One of the marina employees found the young man after he had taken his life.

When I returned with the water, Marina worked quickly to spread it around her small memorial garden.  I stood nearby.  Just tried to be patient; tried to experience a bit of what she must feel.  Tried to stand around as Jesus might have.  We exchanged contact information.  I assured her I would try to remember to water her memorial garden and pray for her as often as I visited this little place near Semiahmoo where I like to go and study.  I reckon it’ll feel different from now on.  But I will certainly pray.  And pray I did…with Marina, right there where her son took his life.  She will be comforted.  I'm certain of that.  God is that good.

There are more than a few that I will remember today.  Not the least of which is my Dad, passed away over 15 years ago now.  Certainly my Grandparents will be remembered.  But as well, I will remember Kyril and I will be praying for his Mom, Marina.