Hindsight tends to prove prophetic doesn’t it?  You run out of gas between two off-ramps… “Argh, should’ve put a couple gallons in before leaving town!”  You’re halving a recipe and forget, and put in the full amount of milk, or you’re finishing a lengthy project and get excited to be done, and you glue the wrong pieces together…  “Ugh, should have slowed down!”  Or how about this one…  You try to slide a take-n-bake pizza off the thin cardboard it comes on straight onto the oven rack and it falls into the hot oven…
Recently Amy went to Houston with my Mom and Sister to enjoy my Sister-in-law’s opera performance. With Amy away, dinner options for me and the kiddos were narrowed considerably.  The best options in such a situation are those that yield the most reheatable leftovers.  Bulk amounts of food like what you get at Costco becomes the “duh” choice.  And easy foods like the Costco pepperoni take-n-bake pizza, on sale for $5.99, become the “double duh” choice.  What better way to start five days and four nights, just me and the kids.  I picked up the pizza and headed home.
Now, I don’t know about you, but for me, just pepperoni is boring.  So, I like to add toppings to near flood stage:  sausage, green peppers, banana peppers, tomatoes, sweet onion, more pepperoni, etc.  The kids like olives, so they find their place on the mounting masterpiece.  In time, operation “doctored pizza” was done.  A bulging pizza pie that left the kids in awe…  But not nearly to the degree that the next episode would.
Perhaps I should have known the thin corrugated cardboard sheet the pizza comes on was not engineered for the weight of additional toppings.  Or perhaps I should simply have added the toppings after the pizza had been transferred to the rack in the already preheating oven.  But, shoulda, coulda, woulda…I didn’t.  Remember, hindsight tends to prove prophetic?  As I bent down to gently slide the heavily topped pizza onto the oven rack the cardboard buckled, the pizza folded, and the cheese and toppings spilled all over the nearly 450 degree oven.  (Slow motion moment…you’ve had them, I know.)
I yelled something.  Honestly, I don’t know what it was.  I’m pretty sure it was rated “PG” though.  Whatever it was, the kids must have thought I was calling them in because all three of them came running.  I did what any frustrated and temporarily single parent would do if they just ruined dinner for their three starving kids.  I kindly asked my three angels to re-attend to what they were doing and Dad would clean up the burning toppings and bubbling cheese and remake dinner momentarily.  Yeah, right!  I barked something at them and it wasn’t that.  But whatever it was, it must have indicated a particular hopelessness that Hope, my oldest, picked up on.
The kids scattered back to whatever they were doing before.  I stood there staring at the open oven and the pizza.  My anger fumed like the burning toppings.  I paced the kitchen a time or two figuring the smoke detector would sound any second.  I muttered harshly under my breath and shook my head.  I became more and more irritated, mostly with myself.  I found myself at more than a few crossroads, forced to decide if I would become more aggravated with the obvious life annoyance or move back toward realizing the accidental happens and consequences don’t have to lead emotional responses… “No big deal, just clean it up and move on.”  I chose the former, aggravation and irritation, at least at the first couple crossroads.  The more the now crisp burnt toppings billowed stench into the air, the more my attitude smelt similar.
Well, I turned off the oven and began salvaging as much of the pizza as possible.  After several minutes of kneeling at the open oven (a fine time to be praying, mind you) and allowing my temper to cool, Hope tiptoes back into the kitchen with an envelope in her hand, “Here Daddy.”  “Thank you Hope, just set it on the counter.  I need to finish cleaning up.”  She did…and I did.
After piecing the pizza back together with some semblance of form, though falling way short of its original appeal, I put it gently back into the oven – both halves – and picked up the envelope Hope had left on the counter.  Inside was a card she had scribbled out in seven year old penmanship.  I’ve added the pictures here of what she wrote… 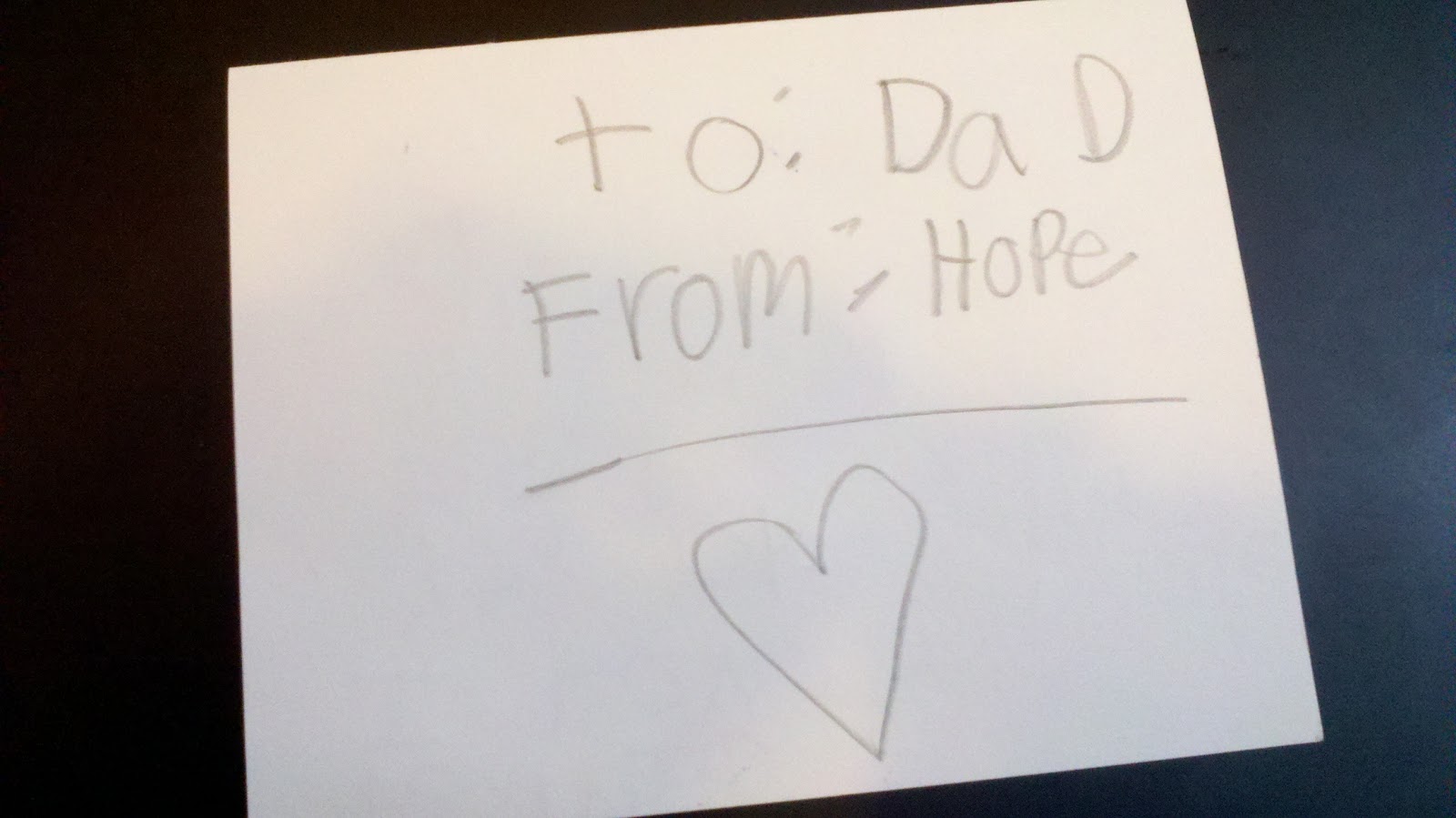 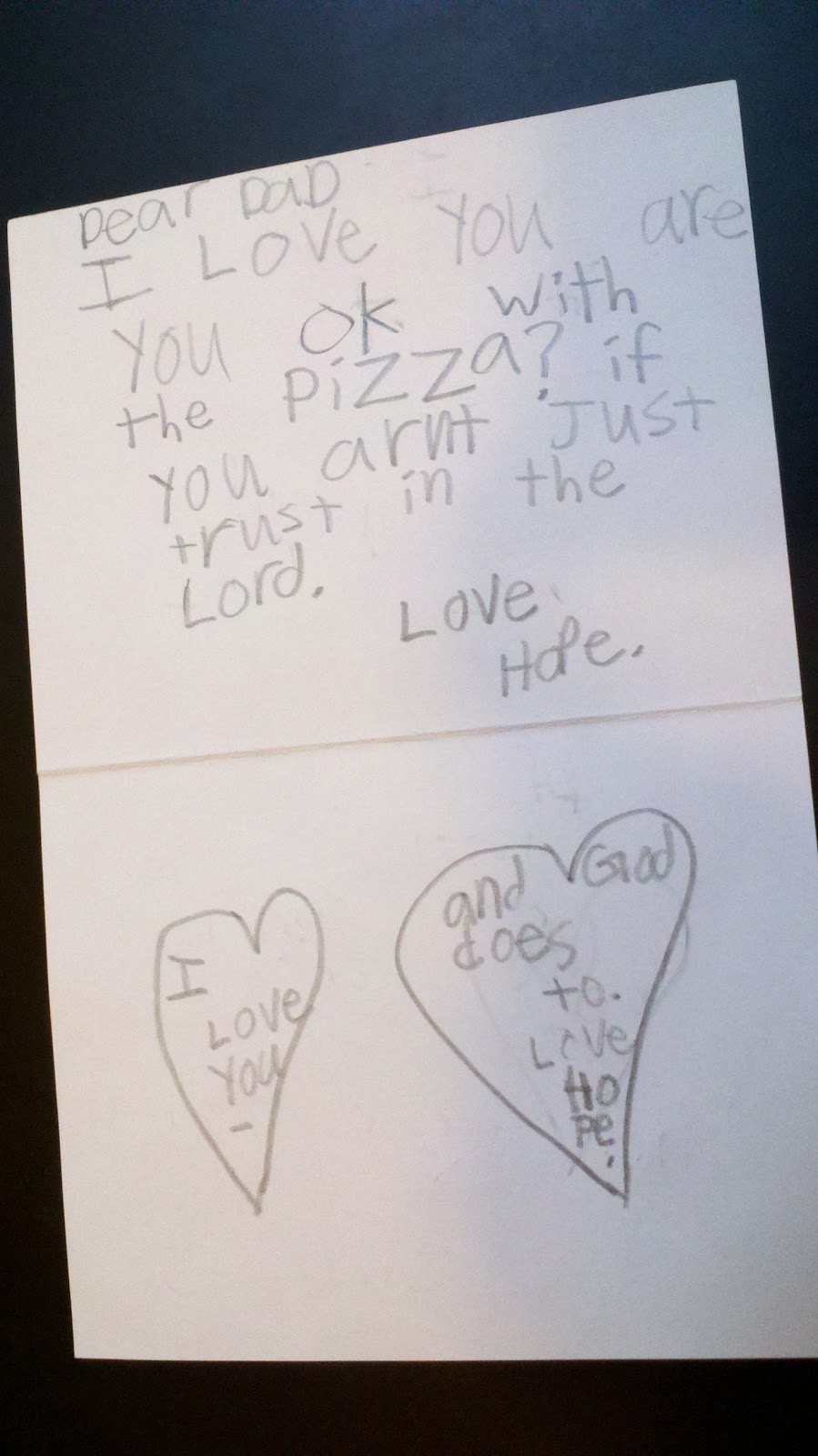 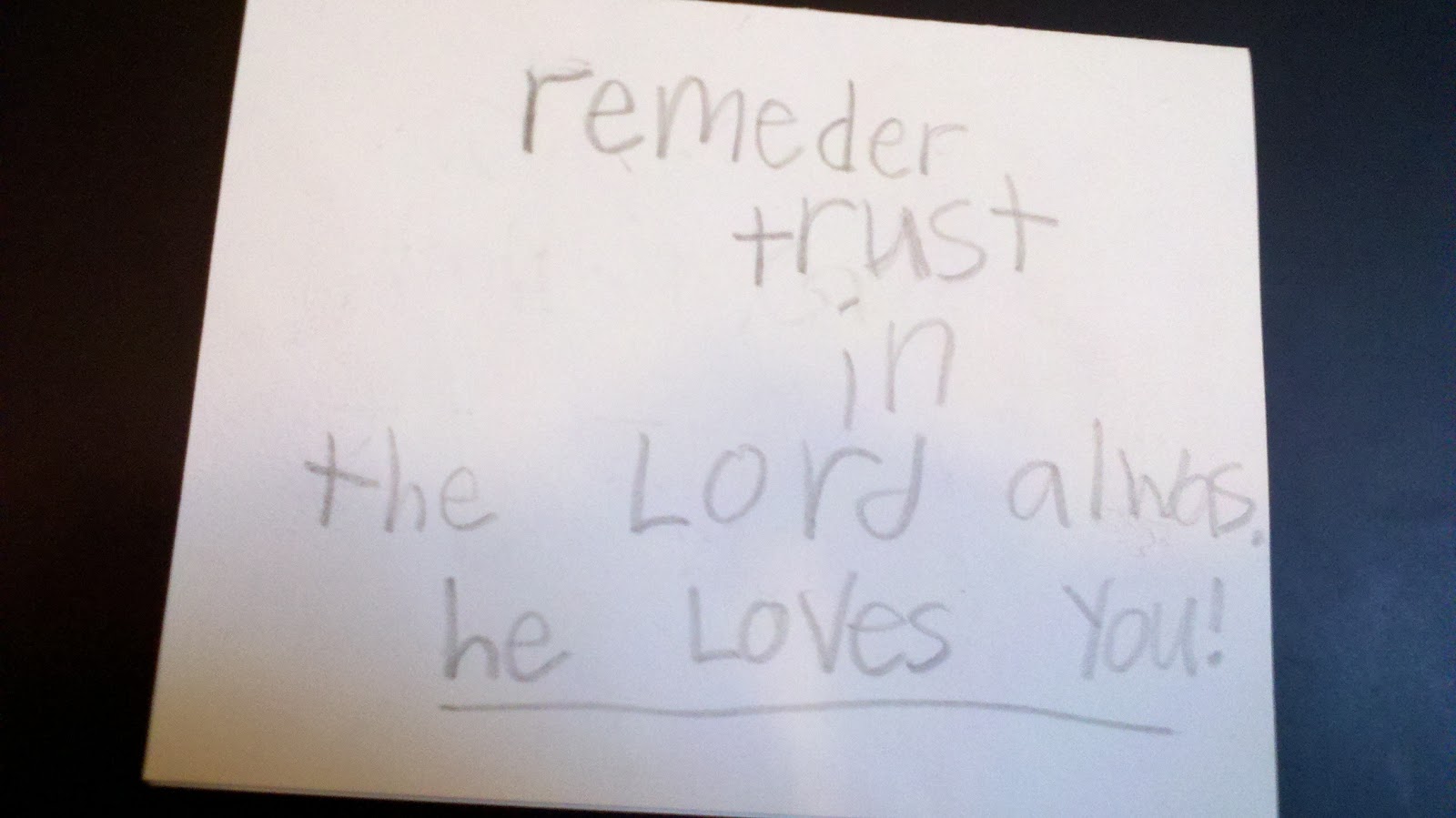 Beautiful.
I walked over to where she sat cuddled up reading in the glider rocker.  I knelt down by her and took her in my arms.  I thanked her for the card and what she wrote.  And then I tried, in my brokenness and convictions of heart, to bless her; to speak life back into her and return to her what my barking words, though indirect, stole from her.  I got right up by her ear, because sometimes the sound of breathing keeps attention better than eye contact, and I said, “Hope, listen very carefully to this.  This is truth.  And don’t ever forget this.  God has given you the gift of encouragement.  Don’t forget that…"
She smiled and wrapped her arms around my neck, squeezing for several seconds.  As I walked away I turned back to her and told her I would read the card at her wedding someday.  She thought it was a silly thing to say and giggled, but I was serious.  Whoever marries this Princess needs to know that she is capable of a rescue mission.
See, an incidental event, like dropping a pizza or running out of gas or messing up an important project or recipe, has the potential of putting us in a cosmic spotlight; making us the central prize of a battle that almost, if we could see past the curtain, doesn’t even seem like it’s our battle anymore.  The emotions that race through your nerves, the actions that swing to your appendages, the choices that blow our your mouth, they are all ours in that moment to be sure.  But in another realm; one that is never more present than that moment, the battle between two kingdoms and theirs forces heats up.
I can say, in those seconds turned moments that the pizza fell and lay upside-down in the oven, I made choices to act and say things that could only have been influence by God’s enemy.  Anger and the actions that associate with it aren’t characteristic of Andy Weeda in Christ anymore.  The timing was such that a battle was on.  And I made choices that dragged me toward the wrong kingdom in those moments.  As Paul says in Romans 7, it was no longer I who was doing it, but it was the law of sin in me at work, rabid and foaming and uglier than what the angels usually see produced in me.
What I love is the tactic of my God’s army.  To prick the young heart of a seven year old and quicken a spiritual gift in the making to spill out good-kingdom encouragement; even exhortation, in a form I would receive in that moment.  To send a letter across enemy lines – and those moments in the kitchen were such that it was certainly ground take by the enemy – with words so simple, yet rich and true that they sunk down deep to whatever had been shackled and chained, and loosed me back to my God…the God of Hope that is, who in that moment, filled me with such joy and peace that I could not but trust in the Lord as the card suggested (See Romans 15:13, the verse Amy and I have prayed over Hope since before she was born).  Without a doubt I had been rescued by Hope.
Email Post 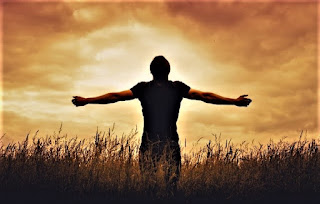 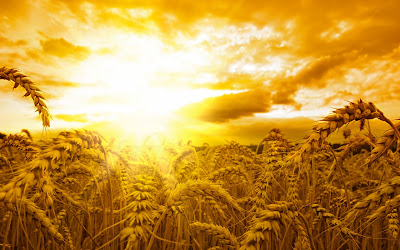